​Barnraisers launched as a one-person labor of love, but is slowly growing. With your support, we hope to grow our crew of organizers (and then you can come back here to celebrate as the term "team" becomes even more accurate).


​That’s Garrett, our founder. You can email him at garrett@barnraisersproject.org.

For the first dozen or so years of his career, he followed the kind of path that would be familiar to a lot of social-justice-inclined white people. He taught fifth graders on the Navajo Nation and refugee adults in Chicago. He received a Fulbright Fellowship to study international solidarity work in Sweden and Tanzania. He held both local and national leadership positions at Teach For America. And then…well… he left that path. It’s a good story, which you can read about here. The short version is that he started to question why the default assumption amongst do-goodery white people is that “the work” is always in other peoples’ towns and neighborhoods. Those questions turned into other questions (about white-saviorism and the hunt for individual absolution and how social change actually happens) and the snowball kept rolling until The Barnraisers Project was born.

Other things you should know about Garrett: He’s really good at caring about other human beings, coaching them to be the best community members possible and inspiring groups of people to build things together. He’s lived in Clancy and Missoula, MT; Columbia, MD; Richmond, IN; Crownpoint, NM; Stockholm, Sweden; Chicago, IL and Madison and Milwaukee, WI. He’s a dad, which rules. He is also the author of The White Pages (a newsletter that a lot of people seem to enjoy) and a book-in-progress for Simon and Schuster (it will be about all of this!). Oh, and he still makes actual, physical mixtapes (and would probably send you one if you asked). You can follow him on Twitter and Instagram.
​ 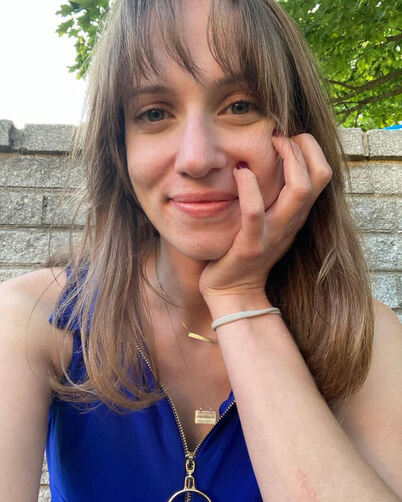 That's Carly, our Manager of Operations. You can email her at carly@barnraisersproject.org

Born and raised in Southeastern Wisconsin, Carly spent six years living in New York City, where she studied Film & Television and worked in the entertainment industry. As a producer and production assistant, she worked tirelessly as the “how” when it came to bringing an idea to life on screen for various films, commercials, and TV shows.

So, how did Carly end up at Barnraisers? Funny you should ask! In 2018, Carly moved back to the midwest and started working as a nanny for two wonderful children. That’s how she met Garrett - he’s their Dad!
After three years of full time childcare for Garrett & his family, Carly transitioned to a “best of both worlds” position and began working with Garrett for The Barnraisers Project in the fall of 2021.

In short, Carly handles the day-to-day logistics of Barnraisers. She assists Garrett with a hodgepodge of tasks that includes preparing for cohorts, handling merchandise, database management, and whatever else Garrett throws her way. Simply put, Carly helps with the “how” of Garrett’s vision and The Barnraisers Project as a whole.

​Other things you should know about Carly: She truly enjoys helping people - whether it's by keeping them organized at work, or by lending a hand (or ear) wherever they may need one. She loves kids (obviously), animals, and spending time with her family. She also loves writing- fiction, non fiction, children’s stories, or even just handwritten letters. In fact, she collects really cool greeting cards, and even designs & makes her own.
​
Donate